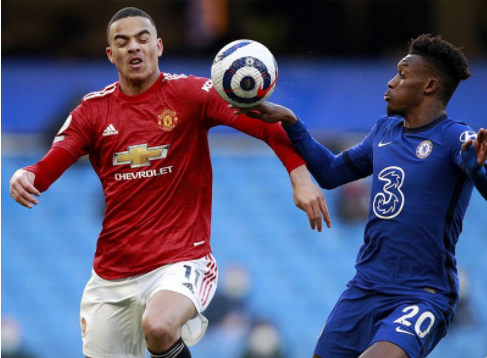 VAR is under scrutiny once again following a controversial handball review in Sunday’s goalless draw between Chelsea and Manchester United.

Both manager Ole Gunnar Solskjaer and left back Luke Shaw were left outraged and confused by the officiating.

Manchester United were denied a penalty after Callum Hodson-Odoi appeared to handle the ball in a tussle with Mason Greenwood. Referee Stuart Atwell didn’t give a penalty. However, he was prompted by VAR to review the incident again, and stuck to his original decision.

What left Shaw incensed was a conversation he overheard between the referee and Manchester United captain Harry Maguire.

“I don’t know why they stopped [the game] if it wasn’t going to be a pen. The ref even said to H (Harry Maguire), I heard him that ‘if I say it is a pen, then it is going to cause a lot of talk about it after’, so I don’t know what happened there.”

Manchester United have since insisted that Luke Shaw misheard the conversation. Both he and Solskjaer have escaped FA punishment for their comments post match.

VAR controversy in this match was sadly inevitable. Before the game, the Chelsea website featured a preview article that mentioned Maguire and refereeing.

“The Man United skipper’s actions will also be under scrutiny again on Sunday after his penalty area tangle with Jamal Lascelles last weekend. In recent Chelsea meetings the Red Devils’ centre-back has survived VAR reviews of a potential penalty foul on Cesar Azpilicueta and violent challenge on Michy Batshuayi that may well have affected the outcome,” it said.

The Man Utd boss condemned it after the game. “It’s all these outside influences, VAR talk from [Chelsea] about Harry — that’s cheeky putting it on their website, that’s influencing referees. You can go back and look at the website. You can read it, what they’re saying about all the controversy with Harry Maguire and putting pressure on the referees to give penalties against us.”

Solskjaer is right, outside forces are influencing referees. The Callum Hudson-Odoi incident would have been a penalty earlier in the season.

Perhaps a solution to this would be to mic up the referees like they do in Rugby, although that’s not the most convenient comparison. Rugby has a different culture when it comes to respecting the officials.

However, if the officials knew that their explanations to the players would be broadcast to viewers it might result in a less confusing experience for everyone.

In football, the Australian A League has implemented mic’d up referees and it has been a success. This demonstrates that it could at least be attempted in the Premier League.

Until something changes, we will continue to discuss VAR decisions ad infinitum.