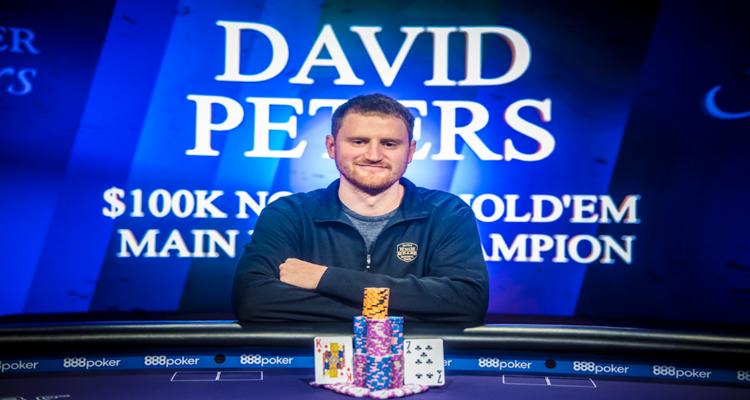 David Peters was the winner of the 2018 Poker Masters Main Event in the Aria Resort & Casino, Las Vegas.

David Peters began the event as the chip leader and eventually earned the title, winning $1,150,000.

The event saw top poker players from around the world compete in tournaments for a chance to play in the main event. The 2018 Poker Master Main Event saw David Peters compete against 25 other players.

Bryn Kenney, Koray Aldemir and Dan Smith joined him on the final table. When play began, Peters held a small chip lead over Dan Smith. Bryn Kenney and Koray Aldemir weren’t far behind. Kenney, who had the short stack, was eliminated queen-ten up against the queen-jack of Aldemir.

After that, Peters, Kenney and Aldemir began three-handed play. The trio played for 175 hands before Aldemir was eliminated. Peters and Smith then decided to speed up the playing structure so that the game would go at a quicker pace.

Final Play, Via The Poker News

Both players were pretty even in chips, but Peters gained an advantage early on when he earned a top pair on a three-bet pot. He then continued to earn big hands and gain a much larger lead to help secure the win.

On the final hand, Peters shoved all in from the button with 3,780,000. Smith called, putting his 1,140,000 all in. Peters showed K-7 off-suit while Smith held A-7 of diamonds. The flop fell 3-4-10, which helped Smith to further his advantage. However, the King on the turn shifted the hand towards Peters and the 6 of spades on the river secured him the win, sending Smith home in second place.

Get the thrill of the 2018 Poker Masters Main Event from your desktop or mobile with 888, Bet365, Betway & more! To see which online poker site is best for you, read all about them in our reviews section!