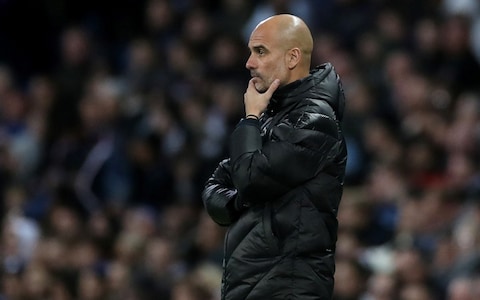 It usually takes until April or May for Manchester City manager Pep Guardiola to end up with egg on his face. Out thinking himself in a crunch Champions League game is an expectable, and somewhat forgivable mistake from him.

The condemnation that follows having said something a bit daft will be a new experience for the suave but eccentric coach.

Pep Guardiola caused a stir in midweek when he called for more fans to attend the game against Southampton on Saturday. He said ‘we would like more people’ after a crowd of 38,062 watched City beat Leipzig 6 – 3.

Pep Guardiola got his wish. The 52,698 fans who attended on Saturday however, did not. Manchester City laboured to a 0 – 0 draw with Southampton after not managing a shot on target until the 90th minute.

“Always when the game is not good I feel bad for them. They come to see a show, to see a game and when it doesn’t happen I feel a bit guilty because we didn’t play good.”

“I never complained about how many come or don’t come. I have never thought this in my life. I don’t know why people are asking me this question. I am grateful even if 85 or 100 people come.

“We were not good in our build-up. We lost simple balls in our process because we were not clever and a little bit sloppy. That is why I have to compliment Southampton. We move forward.”

The ‘criticism’ of fans was, in truth, overblown. However, Guardiola was perhaps unintentionally portentous when he said he wanted to see more fans in the ground because his players would be tired after the Champions League game.

Read: Manchester United Defeat Shows They Are Far From Complete

The players were indeed tired, and an insipid performance against the Saints culminated in a Kyle Walker red card.

It’s fair to say nobody will feel sorry for Guardiola or City. If there is any team who can cope with a demanding schedule, it’s them.

City face a big week ahead with Wycombe in the League Cup, Chelsea in the league and PSG in Europe. Guardiola would do well to use his clairvoyance to tell his players they’ll be up for it.