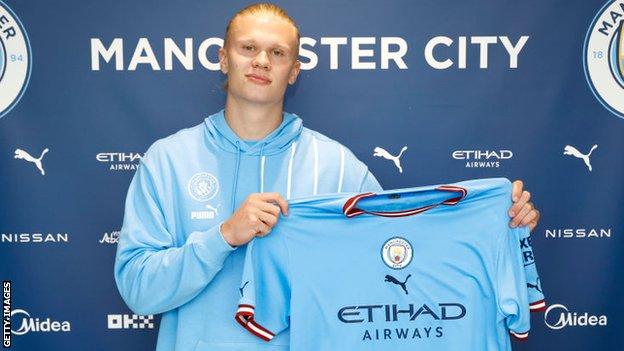 Erling Haaland scored a penalty and another goal in style in between being thrust onto the same stage as legends.

The Premier League’s latest mega star at just 22 years old has a cool head in front of goal. Luckily, Erling Haaland appears to have a cool head off the pitch too, because he’s about to become the only person in any room he’s in who does.

Prior to his City debut against West Ham, Haaland was interviewed by Premier League record goalscorer Alan Shearer, no less.

‘How do you deal with the pressure?’ he asked Haaland, without a hint of irony. Between that, and the nature of his post match interview, the Norwegian superstar has done well not to feed the budding frenzy.

Haaland arrived from Germany with a reputation as a guy who’s not the most forthcoming in interviews. If those are the type of questions he routinely gets, you can’t blame him.

‘Can you be as good as Thierry Henry? What about Ronaldo? Can you score 35 goals? Will you break all the records? Will you score a goal in every match?’

Haaland batted away these questions with some wonderful ‘I let other people speak’ fare, but the Sky Sports pundits weren’t to be deterred. They persisted with the Henry narrative in the studio afterwards and decided that based on two goals against West Ham, Haaland is going to be the Premier League’s greatest ever striker.

Let’s not mess around, Haaland could absolutely do that, but he’s going to have to keep the press as far away from him as possible. He’s been playing up the fact that he’s sort of English, having been born in Leeds to a Premier League footballer.

Unfortunately the media have taken this as a license to build him up the way they do English players. If Haaland has a poor run of form, or struggles to adapt, we know who will be waiting for him.