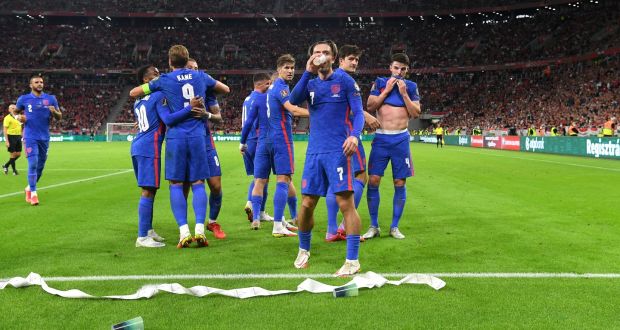 England beat Hungary 4 – 0 in their first competitive fixture since their disappointing Euro 2020 Final defeat to Italy.

The World Cup qualifier was mired by racist chants at the Puskas Arena in Budapest. Nonetheless, England put in a creditable performance.

Hungary showed in Euro 2020 that their home ground is a difficult place for away teams to play. England made light work of them with goals from Kane, Sterling, Maguire and Rice.

What this win shows is that Gareth Southgate is still on track despite the incredible disappointment of Euro 2020.

When Gareth Southgate took the manager’s job, he had a project in mind. The plan was, has always been, to win the World Cup in 2022. This project is built on the foundation of stability from Southgate and ever-improving young players.

Strictly speaking, the Euro 2020 Final was ahead of schedule. A win, while welcome, would have been unexpected.

What England did over the course of that tournament was restore faith among an often neurotic fanbase. The fans now feel confident their team can win most games, which hasn’t been the case in decades.

However, the English football psyche is brittle. The defeat to Italy, especially on dreaded penalties, could easily have stunted the momentum Gareth Southgate has built.

Read: Will Football Ever Learn Its Lesson?

It speaks to his leadership that this project hasn’t yet been derailed by what must have been an utterly devastating Euro 2020 Final defeat.

In Sterling, Kane and Maguire, the team has genuine leaders. As well as that, a genuine best first XI is emerging. The back five is established, as is the partnership of Rice and Phillips in midfield.

Jack Grealish, Mason Mount, Bukayo Saka and Phil Foden will rotate in the attacking positions behind Kane and Sterling. The World Cup is a big ask, but no England team in recent history has a better chance of winning it.