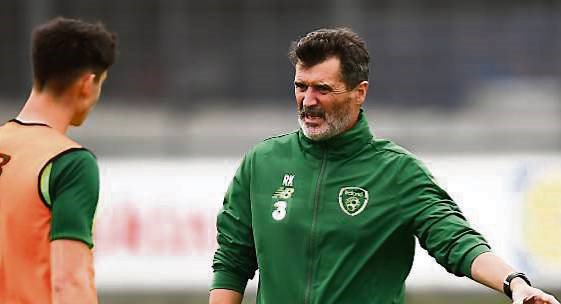 At this point, Roy Keane being involved in an argument is not a surprise to anyone. A fiery character, to say the least, he has spent a career in football cutting people down to size.

Roy Keane, assistant manager for the Republic of Ireland, has recently been involved in a row with midfielder Harry Arter.

Eamon Dunphy and Liam Brady discussed the issue on Dunphy’s The Stand Podcast. The verdict from two grandfathers of Irish football was not good.

Dunphy said that while Keane shouted at players when he was a player, the role of assistant manager is different.

“Martin was in the paper yesterday, he was going back on Roy’s career where he was shouting at (Paul) Scholes and drove on Manchester United and this is a bit of apples and oranges to be quite honest. That’s when Keane was a player on the pitch, he was entitled to do that. He’s assistant manager now, he’s not a player.

“Players who are really injured, unless they are kidding on, need a lot of sympathy and a lot of help. We’ve all been injured as footballers and there is nothing worse. In Arter’s case, if Martin O’Neill felt Arter was kidding on then he shouldn’t be picked. If he’s not he needs sympathy and support.

“As assistant manager he should be helping Martin and in the Arter case he hasn’t helped him at all. In fact, Arter has said he doesn’t want to play, That’s being destructive.

Is he equipped to be an assistant manager? Definitely not.”

Brady believes that Keane should be let go, such is his damaging effect on the Ireland squad.

“Every time there is an international match there was a story about Roy Keane, whether he was having a go at somebody or whether he was launching another book of his.

“I can’t understand how Martin O’Neill could put up with that. He’s got an international match and Roy Keane decides to launch his book on the week of an international game. It’s crazy… mind boggling and it’s really taking the piss, isn’t it? Martin O’Neill, or the powers that be… John Delaney has to say enough of this. This has got to stop.”