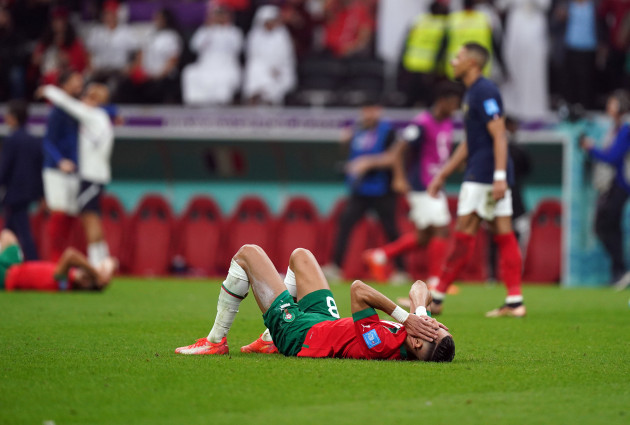 Olivier Giroud, fine player that he is, didn’t have pace when he was 21 and he certainly doesn’t now. When he’s sprinting past you in a World Cup semi final and you can’t keep up, it’s probably time to call it a day.

That’s exactly what happened to Morocco captain Romain Saiss, who played on an injured hamstring and had to be substituted.

That his replacement Selim Amallah had to spend a considerable amount of time strapping his leg up before coming on was emblematic of a team down to bare bones in the World Cup semi final against France.

Read: Olivier Giroud Is The Hero The World Cup Deserves

The first African team to play in a World Cup semi final found themselves one nil down after 5 minutes. It was a result of their injuries and resulting makeshift defence and Morocco needed to do something they hadn’t done in the tournament – come from behind.

Walid Regragrui’s resolute team had not been a goal down until that point in their remarkable World Cup campaign. The fear for teams like that is once they do go a goal down, you expect them to get thrashed.

However, that is not what happened. Morocco actually controlled the game for large periods, and could have scored if the ball bounced right for them.

In the end, it was the defending champions France who got the good fortune. The ball breaking to Theo Hernandez amid Moroccan defensive disarray afforded them a dream start.

When a Kylian Mbappe shot squirmed towards the far post, Randal Kolo Muani capitalised. He duly scored his first goal for France and ended the game.

Want to bet on the World Cup final? See our reviews section to find the best offers!

That was in the 79th minute, and in the hour and ten between France’s goals, Morocco gave them a game.

It has been a wonderful underdog story, but there has been something inevitable about France and fellow finalists Argentina. In the end, we get our showpiece final – Messi VS Mbappe, South America VS Europe, two storied nations fighting for a piece of history.

Although they lost, Morocco will forever be the holders of their own piece of history and the players will be welcomed home as heroes.