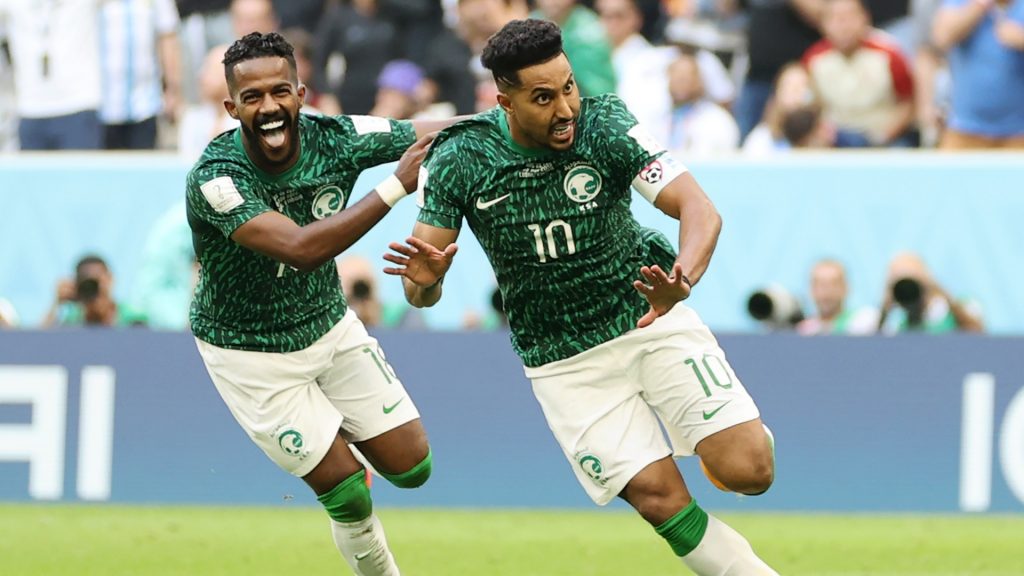 Whatever happens next, Saudi Arabia will be forever remembered for providing the first iconic moment of the World Cup 2022.

Saudi Arabia showed what international tournaments are all about with a 2-1 comeback win over Lionel Messi’s Argentina.

It was a glorious underdog story as they put an end to Argentina’s 35-game unbeaten run. It was also an incredibly unlikely underdog story considering how the early stages of the game played out.

The collective eyebrows of the world were raised in unison as Saudi Arabia set up with an incredibly high line.

It could have been so different but for some minimal offsides. Argentina did what everybody expected them to – exploit their opponents’ high line with their lethally dangerous players.

They took the lead with a Messi penalty, but went on to have three more goals disallowed. All were similar, with Argentina players running in behind and finishing astutely.

Three accomplished finishes, one from Messi and two from Lautaro Martinez were all ruled offside. Perhaps it took the wind out of Argentina’s sails, because the game changed after half time.

Suddenly Argentina felt like the game was going against them and Saudi Arabia were emboldened. This came to fruition when Saleh Alshehri equalised on 48 minutes with an empathic finish into the far post.

If that was good, what happened five minutes later was fantastic. Salem Aldawsari curled a ferocious shot into the top corner from the edge of the box. Keeper Emi Martinez got a hand to it, but couldn’t stop the goal.

Argentina were punch drunk, and suddenly both sets of players realised the enormity of what was on the cards. The Saudi players, buoyed by the potential of an historic victory, started to play out of their skin.

Argentina began trying too hard and in spite of the pressure they put on their opponents, couldn’t find the final pass or shot. They found themselves up against a team defending heroically in every moment. Suddenly, Saudi Arabia’s high line was not a puzzling tactic but a real danger to Argentina, who could have conceded more.

We all know that Saudi Arabia may not even progress from the Group Stage. We also know that plenty of eventual champions have lost their first World Cup game, so it isn’t over for Argentina.

However, yesterday proved one of the oldest tenets of football: anyone can beat anyone else, and that five-minute Saudi Arabian flurry was what the World Cup is all about. There are 50-plus games still to play, but that moment will take some topping.