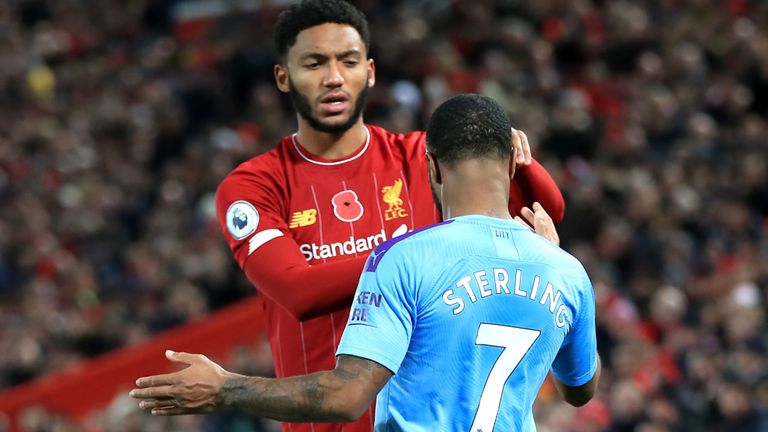 Raheem Sterling has been excluded from England’s EURO 2020 qualifier against Montenegro on Thursday following a training ground dust-up.

The incident, announced by the FA on Monday night, involved Raheem Sterling and Joe Gomez. The pair reportedly had a confrontation in a private team area that left the Liverpool defender with a scratch on his face.

The incident is apparently a continuation of the tension felt between the players when Liverpool beat Manchester City 3 – 1 on Sunday.

Raheem Sterling was under scrutiny following the game, as he didn’t perform to the best of his ability a Anfield. Sterling has struggled against Liverpool every time he’s faced them since he moved to Manchester City.

Read: Will Liverpool Hold on For the Premier League Title?

Sterling took a lot of criticism for leaving Liverpool. As a result, there is a feeling that he tries too hard to produce when he returns to play them.

His frustration clearly boiled over into England’s training camp, although we do not yet know the exact details.

“Raheem in his (social media) post last night explained for a very brief moment his emotions ran over. It would be correct to say that’s not the same for Joe,” he said

“We are dealing with a very young squad in a sport where emotions often run high. These things happen in football. My priority is always the care and well being of all my players. All my players.

“Then you have a decision to make as to whether there needs to be something further, which is my reasoning for not selecting Raheem for the game on Thursday.”

“I love all of my players. We are like a family and all family have disagreements,” he said.

“Most important for any family is to come through those disagreements and work through them.”

Want to bet on EUFA EURO 2020? See our reviews section to find the best odds and most attractive markets!

“I don’t expect as a manager to never have to deal with things that are unexpected or difficult.

“The reality is I’m not prepared to go into details. There is enough conjecture and opinion and talk out there and we don’t need to add to it.

“As a group we’ve decided the best way forward and we’re in agreement on that. We move on from there.”